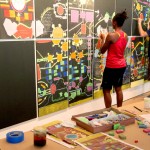 Ashley Hunt is an artist, activist and writer who engages the ideas of social movements, modes of learning and public speech. His work is often concerned with questions of power and the ways that some people have more, others have less, and what can be done about that. Ashley’s works include the performance, Notes on the Emptying of a City, a ‘dismantled film’ that recounts his time in New Orleans after Hurricane Katrina; Communograph, a multi-platform project of community authorship through Project Row Houses in Houston; 9 Scripts from a Nation at War, the collaborative video installation produced for documenta 12 with Andrea Geyer, Sharon Hayes, Katya Sander and David Thorne; On Movement Thought and Politics, an interdisciplinary collaboration with dance and performance artist, Taisha Paggett; and the ongoing Corrections Documentary Project, a body of work addressing the politics of growth in the largest prison system in the world — that of the United States. Recent exhibitions and performances include the 2012 Live Arts/Philly Fringe Festival, the 2012 Biennial in Sinop, Turkey, the Museum of Modern Art, the Made in LA, 2012 biennial of the Hammer Museum and LAX Art, and Woodbourne State Prison in upstate New York. Ashley co-directs the Photography and Media Program at California Institute of the Arts and just planted a peach tree.