Ms. Deamer is principal of the firm, Peggy Deamer. Prior to this, from 1986 to 2002, she was a partner in the architectural firm of Deamer + Phillips.  She is the Assistant Dean at Yale University’s School of Architecture where she teaches design and history/theory.  She has also taught at the Cooper Union, University of Kentucky, Barnard College, Columbia University and Princeton University, among other institutions.  She received her BA from Oberlin College, her BArch from the Cooper Union, and her Ph.D. from Princeton University.  Her design work has been published in Progressive Architecture, House and Garden, The New York Times Magazine, among other journals and newspapers.

Her Ph.D. was on the English 20th century art and architecture critic Adrian Stokes, who was analyzed by Melanie Klein and saw his aesthetic work as an extension of her psychoanalytic theories.  Deamer’s current work concentrates on how theories of form and architectural production – especially prefabrication and mass-customization – influence contemporary culture.  Articles written by her have been published in Assemblage, Perspecta, Architecture and the Everyday and Drawing Building Text, among other publications.  She is the editor of The Millenium House, based on a studio she taught at Yale.  She has served on the board of the New York Foundation for the Arts, Journal of Architecture Education (where she was Design Editor) and currently serves on the board of Storefront for Art and Architecture and Yale’s student journal, Perspecta. 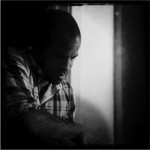 Douglas Kearney is a poet/performer/librettist. Cultural critic Greg Tate remarked that Kearney’s National Poetry Series selection, The Black Automaton (Fence Books, 2009), “flows from a consideration of urban speech, negro spontaneity and book learning.” Crescent City, a hyperopera composed by Anne LeBaron, premiered in Los Angeles in 2012. A Cave Canem fellow, he has received a Whiting Writers Award, a Coat Hanger award, MAP Fund grants and several fellowships. Kearney teaches in the School of Critical Studies at CalArts, but has also lectured in the Music and Theater schools. Red Hen Press will publish Patter in 2014.