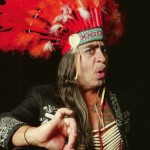 Guillermo Gómez-Peña was born in Mexico City and moved to the US in 1978, where he established himself as a performance artist, writer, activist, and educator. He has pioneered multiple media, including performance art, experimental radio, video, performance photography and installation art. His eight books include essays, experimental poetry and chronicles in both English, Spanish and Spanglish.

Most of his artistic and intellectual work concerns the interface between North and South (Mexico and the U.S.), border culture and the politics of the brown body. His original interdisciplinary arts projects and books explore borders, physical, cultural and otherwise, between his two countries and between the mainstream U.S. and the various Latino cultures: the U.S.-Mexico border itself, immigration, cross-cultural and hybrid identities, and the confrontation and misunderstandings between cultures, languages and races. His artwork and literature also explore the politics of language, the side effects of globalization, “extreme culture” and new technologies from a Latino perspective.  He is a patron of the London-based Live Art Development Agency.  Gómez-Peña received both his B.A. (1981) and M.A. (1983) from California Institute of the Arts. He studied Linguistics and Latin American Literature at the UNAM (1974–1978, Mexico City).